In this article, we’ll see how to write a basic “Hello World” DAG in Apache Airflow. We will go through all the files that we have to create in Apache Airflow to successfully write and execute our first DAG.

Firstly, we will create a python file inside the “airflow/dags” directory. Since we are creating a basic Hello World script, we will keep the file name simple and name it “HelloWorld_dag.py“. Keep in mind if this is your first time writing a DAG in Airflow, then we will have to create the “dags” folder.

In this step, we will create a DAG object that will nest the tasks in the pipeline. We send a “dag id”, which is the dag’s unique identifier.

Now we will define a “start_date” parameter, this is the point from where the scheduler will start filling in the dates.

Once the scheduler starts filling in the dates from the specified “start_date” parameter on an “hourly” basis and it will keep filling in the date till it reaches the current hour. This is called a “catchup“. We can turn off this “catchup” by keeping its parameter value as “False”.

Now we will define a PythonOperator. A PythonOperator is used to invoke a Python function from within your DAG. We will create a function that will return “Hello World” when it is invoked.

Like an object has “dag_id“, similarly a task has a “task_id“.

It also has a “python callable” parameter, which takes as input the name of the function to be called.

Now we will create a callable function which will be called by the “PythonOperator”.

We don’t need to indicate the flow because we only have one task here; we can just write the task name. But if we had multiple tasks that we wanted to execute, we can set their dependencies by using the following operators “>>” or “<<“ respectively. 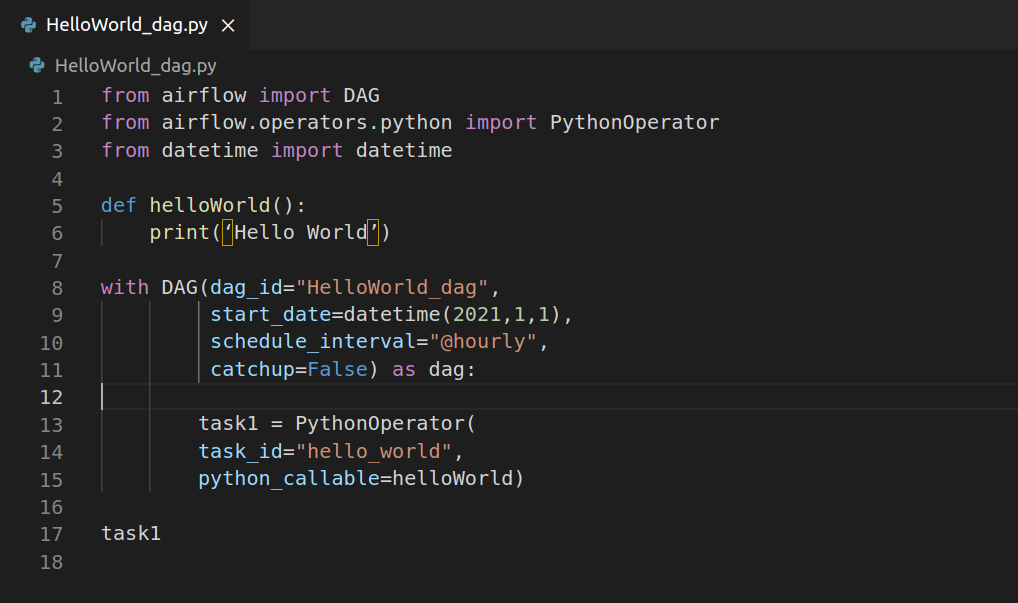 To run our DAG file

To execute our DAG file, we need to start Apache Airflow and Airflow scheduler. We can do that using the following commands:

We will be able to see our DAG running in Airflow Web UI once we log in to the terminal successfully.

In this blog, We saw how to write our first DAG and execute it. We saw how to instantiate a DAG object and Create a task and a callable function.