Apache Storm cluster is superficially similar to a Hadoop cluster. Whereas on Hadoop you run “MapReduce jobs”, on Storm you run “topologies”. “Jobs” and “topologies” themselves are very different — one key difference is that a MapReduce job eventually finishes, whereas a topology processes messages forever (or until you kill it).

There are two kinds of nodes in a Storm cluster:

The master node runs a daemon called “Nimbus” that is similar to Hadoop’s “JobTracker”. Nimbus is responsible for distributing code around the cluster, assigning tasks to machines, and monitoring for failures.

Nimbus service is an Apache Thrift service enabling you to submit the code in any programming language. This way, you can always utilize the language that you are proficient in, without the need of learning a new language to utilize Apache Storm.

All coordination between Nimbus and the Supervisors is done through a Zookeeper cluster. Additionally, the Nimbus daemon and Supervisor daemons are fail-fast and stateless. Even though stateless nature has its own disadvantages, it actually helps Storm to process real-time data in the best possible and quickest way.

Storm is not entirely stateless though. It stores its state in Apache ZooKeeper. Since the state is available in Apache ZooKeeper, a failed nimbus can be restarted and made to work from where it left. Usually, service monitoring tools like monit will monitor Nimbus and restart it if there is any failure.

Apache Storm also has an advanced topology called Trident Topology with state maintenance and it also provides a high-level API like Pig. 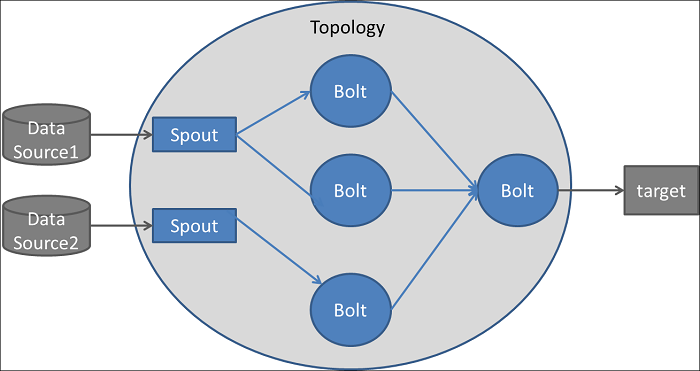 To do realtime computation on Storm, you create what are called “topologies”. A topology is a graph of computation and is implemented as DAG (Directed Acyclic Graph) data structure.

Each node in a topology contains processing logic (bolts), and links between nodes indicate how data should be passed around between nodes (streams).

When a topology is submitted to a Storm cluster, Nimbus service on master node consults the supervisor services on different worker nodes and submits the topology. Each supervisor, creates one or more worker processes, each having its own separate JVM. Each process runs within itself threads which we call Executors.

The thread/executor processes the actual computational tasks: Spout or Bolt.

Running a topology is straightforward. First, you package all your code and dependencies into a single jar. Then, you run a command like the following:

Streams represent the unbounded sequences of tuples(collection of key-value pairs) where a tuple is a unit of data.

A stream of tuples flows from spout to bolt(s) or from bolt(s) to another bolt(s). There is various stream grouping techniques to let you define how the data should flow in topology like Global grouping etc.

Spout is the entry point in a storm topology. It represents the source of data in Storm. Generally, spouts will read tuples from an external source and emit them into the topology. You can write spouts to read data from data sources such as database, distributed file systems, messaging frameworks or message queue as Kafka, from where it gets continuous data, converts the actual data into a stream of tuples & emits them to bolts for actual processing. Spouts run as tasks in worker processes by Executor threads.

Spouts can broadly be classified as following –

All processing in topologies is done in bolts. Bolts can do anything from filtering, functions, aggregations, joins, talking to databases, and more.

Bolts can also emit more than one stream.

What makes a running topology: worker processes, executors and tasks

Storm distinguishes between the following three main entities that are used to actually run a topology in a Storm cluster:

Here is a simple illustration of their relationships:

An executor is a thread that is spawned by a worker process. It may run one or more tasks for the same component (spout or bolt).

This pretty much sums up the architecture of Apache Storm. Hope it was helpful.

Ayush is a Software Consultant, with experience of more than 1 year. He has specialisation in Hadoop and has good knowledge of many programming languages like C, Java and Scala. HQL, Pig Latin, HDFS, Flume and HBase adds to his forte. He is familiar with technology like Scala, Spark Kafka, Cassandra, Dynamo DB, Akka & many more. His hobbies include playing football and biking.