Amazon CloudFront is a web service that speeds up the distribution of your static and dynamic content such as HTML, CSS, js, and images to your users.

CloudFront delivers the content through a worldwide network of data centers called edge locations, which means when a user requests the content that you are serving with CloudFront, the user is routed to the edge location that provides the lowest latency(time delay) so that content is delivered with the best possible performance.

We create a CloudFront distribution to tell CloudFront where you want content to be delivered from and the details about how to track and manage content delivery. Then CloudFront uses computers—edge servers—that are close to your viewers to deliver that content quickly when someone wants to see it or use it. 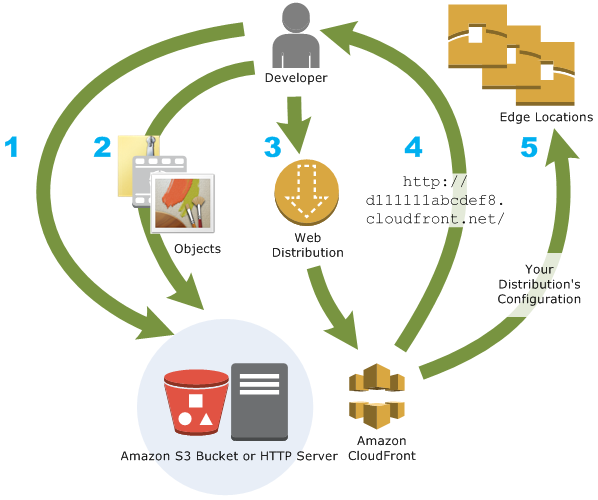 Automate the CloudFront distribution via Terraform:

CloudFront distributions take about 15 minutes to a deployed state after creation or modification.

hosted with ❤ by GitHub

If your object is in a folder within your bucket, include the folder in the URL. For example
if image.jpg is located in the knoldus_images folder,
and your CloudFront URL is: q11asdrfcvs8.cloudfront.net then the URL would be:

Neelam is a software consultant with experience of more than 6 months. She likes to keep up with the trending technologies. She is familiar with languages such as C, C++, Java, Scala, Angular 4 and is currently working on lagom with java. Her hobbies includes playing Table Tennis and listening music.