Alright fellas, put your mask on ! we are about to do a dissection of a scala library called Akka Quartz Scheduler. (Eww!@#$* does it stink?) Well not literally, lets find out what is it first, then according to your nose you will get to know how does it smell 😀 :D.

Akka Quartz Scheduler is a library which gets used for scheduling jobs. Now if you’re thinking that you already have a scheduler in Akka which could does all the scheduling part for you, then you might be wrong, as Viktor Klang
points out about the akka scheduler – ‘Perhaps the name “Scheduler” was unfortunate, “Deferer” is probably more indicative of what it does.’. Well as you have probably guess by now your Akka.system.scheduler.schedule() or Akka.system.scheduler.scheduleOnce() won’t work when you have to do a job like schedule a job at 5.30 pm on Friday every week. You probably could do all the calculation on Tuesday and set the exact time on it, it will work fine until and unless your application goes down for some reason. Then you have to recalculate again and might need to add some more logic into it. Most of the time if we don’t find a library in scala we try to find a similar library in java because they are interoperable. Quartz is what we are talking about here, for this kind of scheduling we use Quartz in java hence we can use it in scala too. Akka-Quartz-Scheduler is also doing the same, it takes care of some of the typical stuffs for you, so that you don’t have handle all that JobDataMap and that sort of stuffs. It wraps all those stuffs for you and what you need to interact with is the Actors. Now if you want to know more about it you can visit their github link. I am going to let you know how you can use this library in your application in the next section and if you are more interested in “How does it work?” rather than “How to use it?” you can skip to the dissection part or checkout the source code yourself. Now lets see –

How to use it

In order to know how to use it lets checkout a repo that I have created in github. Click here to go to the repo, and check out into your directory. So here is the directory structure of the example app 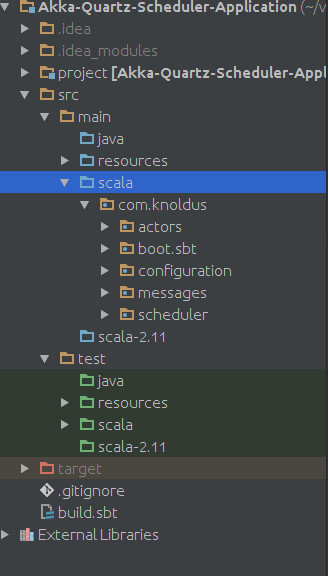 Here I have created two actors as FirstActor and SecondActor and they are in the actors directory. And then there is the scheduler in the ‘scheduler’ directory. Now if you look into the code you will see that I just have a function is called scheduled and it is doing the scheduling part. Firstly the ActorSystem on which the actors should run is being fetched and then ActorRef for the actors are being created. The two lines i.e.

are doing the scheduling part using the Akka-Quartz-Scheduler. The QuartzSchedulerExtension is taking the Akka System on which it will run the scheduling. It’s function schedule takes three parameters, which are – the cron expression on what the schedule job will be occurred, the ActorRef which will be sent a message when the trigger occurred and the message which needs to be passed to the actor.

So the next question would be “how can we test them?”, well for that just go to the test section in the repo and you will find a test case for the scheduler. In this test case we are loading a different configuration apart from the normal configuration files. So for the first actor it is taking a cron expression to fire in every 5 seconds and for the second actor in every 10 seconds. so if we run the test for 10 seconds should get a sequence of Tock which size would be 3.

Okay, so finally let’s go through the dissection part now. The Akka-Quartz-Scheduler library consist of four main scala files and package object. Which are QuartzCalenders, QuartzJob, QuartzSchedulerExtension and QuartzSchedules.

So what does the initialiseCanlenders do? Well it initializes the QuartzCalenders which is an another object of the library we have already seen. So in order to continue we just have to know that QuartzCalendars is returning a Map of name(String) and Calendar (Quartz Calendar of java library), where all the calendars are being set in the scheduler along with names.

Now let’s move to the function schedule that we have used in our example. This function takes the name of the Job (that needs to be schedule), the actor ref (to handle the job) and the message (to pass to the actor to start the job). It creates a jobDataMap of type String and AnyRef, which is later on gets converted into a java map and creates a jobData object. This jobData object is then used to create an actual job(java library JobDetail). This job is then added to the runningJobs variable(which we have initialised earlier). A trigger is being created through QuartzSchedule object and then scheduler schedules a job with this two item job and the trigger. Now you might wonder where is this QuartzSchedule comes from, well we get this object through the name that is being passed to the function, which is being used to fetch the object from the schedules(This is being initialised at the beginning with the help of QuartzSchedules).

There are other functions there as well such as resumeAll, cancelJob, resumeJob, suspendJob which are works on the runningJobs to do the job according to their name. We can check if the scheduler has started, we can make as well as check the scheduler standby. One more important function here is the createSchedule which is used to create a schedule programmatically i.e. without using the configuration. For that you have to send the name of the job, the cron expression for it and additionally you can send the calendars, timezone etc. and finally you have to call the schedule by passing all the parameters that it needs. See the below code as an example

So in summary of this object what we can say is that,
1. It gives us two ways of scheduling by loading from the configuration or by scheduling jobs programmatically through the createSchedule function.

2. As it extends the Akka’s Extension it is going to be singleton for that particular ActorSystem.