Creating a DAG in Apache Airflow

In my previous blog, I have discussed Airflow – A workflow Manager. In this blog, we will write a DAG for Airflow that would define a workflow of tasks and their dependencies. Before writing a DAG file, we will first look into the operators that can be used while writing a DAG.

An operator represents a single, ideally idempotent, task. Operators determine what actually executes when your DAG runs. Airflow provides many built-in operators for many common tasks, including:

Now, we will begin to write our first DAG in Apache Airflow.

Viewing the current scenario, getting vaccinated for Covid is the utmost important task for us. Logging in to the vaccine registration site, and checking the available slots is a tedious task, when several people are trying to access the same server. Wouldn’t it be great to get an email notification every morning describing the available slots and their respected venues?

Let’s write a DAG for it, that would fetch the data from the API, then will store the result in a file, and send that file as an email attachment to your mail every morning.
For an email operator to work, we first need to configure SMTP in Airflow.
Make the following changes in $AIRFLOW_HOME/airflow.cfg file:

Open localhost:8080 in your web browser. Airflow dashboard will be displayed, which contains several DAGs created by Airflow for a new user to begin learning. Find the dag from the dag_id you created.

Click on the DAG to have a detailed look at the tasks.

Here we have three tasks: download_vaccine_details, notify_user and send_email.
Turn on the Dag

The schedule interval is set to None, so we will manually trigger the DAG.

Click on the Trigger Dag button. The workflow will begin.

All three tasks are successful. You can also check logs of these tasks and retry a task in case of failure.
Task Duration will demonstrate the duration of time per task 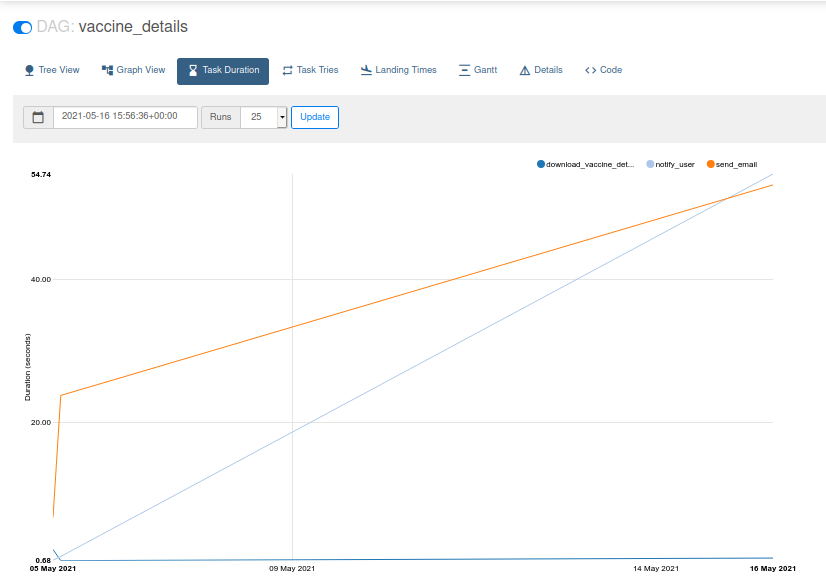 Task Tries will give information about the number of tries a task took to be successful.
Landing times allows you to compare how tasks have performed over time.
Gantt is another way of visualizing the task.
Details consist of the DAG details including Schedule Interval, Start Date, End Date, max active runs, default args, Concurrency, FilePath, owner, and tags.

[Note: The above API is not available for use now. This is just an example of fetching data from an API and imbibing this in our workflow. You can create many such workflows to begin with.]