Fusion of Observables with Observer

RxJs is an incredible tool for reactive programming, and today we’re going to understand briefly about what Observables and observers are.

An observer is used to executing some code whenever we receive some values or get some error or when the process is done or completed.

Generally, Observers are used to handle values (data) which it receives from observables using its 3 types of handlers(Methods) are described below:

1: next(): The next will be called by observer whenever the new values are emitted, and during its execution, there can be infinite no of calls to observer.next(). (Required)

2: error(): This method will be called when observer throws an error. (Optional)

3: complete(): This method will be called when we know there are no more values are available to subscribe, and the execution immediately stops and no more data will be delivered to the subscribers. (Optional) 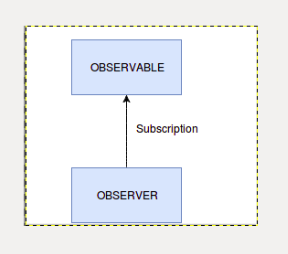 ​​Note : If you don’t supply any of the above mentioned handler then observer ignores that type of notification.

For better understanding lets starts with its implementation.

RxJs (Reactive extensions for javascript) is a library for reactive programming which is mainly used for asynchronous code, and provide an environment for implementing Observables.

2: Now we’ll create an Observable constructor for creating an observable stream of any data and takes subscriber function as an argument.

Synchronously deliver values 12, 24,’Learning Observables with observer’ and then complete.

As You can see in above example observable are created using the new Observable() call and then it is subscribed by an observer which is executed by calling the next().

Observable execution can run for an infinite amount of time, and we need to find some way to stop it from further execution. It is necessary to unsubscribe the observables because it leads to wastage of memory. All you need to do is to call unsubscribe().

I hope this short article will help you in understanding the use of Observables with observers, and to dive deeper into it refer to angular docs click here

2 thoughts on “Fusion of Observables with Observer3 min read”