In this blog, we will try to explore the reporting feature of the cucumber plugin in Cypress. As a prerequisite, we should have a cypress-cucumber integrated framework already. With this cleared out, let’s move ahead.

Firstly, as mentioned we should have the cypress cucumber plugin already configured in our project. The reason is, the plugin, by default, that we are using in our project for having cucumber integrated with our project, generates a cucumber.json file as an output.

This output file contains the result of all our feature file execution. And using this JSON file only we are going to generate an HTML report.

To do so, there are some plugins available that can read this JSON file and prepare an HTML report from it. However, firstly, to make the cucumber plugin generate a JSON file output, we need to make some changes to our cypress cucumber properties.

Since we already have cypress-cucumber-preprocessor plugin in our package.json as mentioned below.

All we have to do now is to modify it a little bit. We need to add the following to this plugin. It will look something like this

In simple words, outputFolder will tell cypress to create a folder in your project under the parent folder of cypress having the JSON file in it. As mentioned earlier, this JSON file will have the result of feature file execution.

Moving on, we need to use this execution data present in the JSON file to create an HTML report. Let’s see, how to do that.

Since we already have the JSON file with execution detail, half of the work is already done. All we have to do now is, we have to install and use the plugin that can convert this JSON data to an HTML report. We can do so by following the steps mentioned below.

You can name this .js file as per your choice. But we are not done yet, if you code the code closely we two main things to fill out here, reportPath, we need to give the path of the directory where we want the HTML report to be generated.

The second one is, jsonDir, to this we need to give the path of our cucumber.json file. And we are done, this is all we have to do.

Now, to generate the HTML report, just run this .js file. But please make sure to place this file at the project root level, not inside the cypress folder. Since it is just a javaScript file we can run it by using the following command.

After running this file, the report will get generated automatically. A sample report looks something like this. 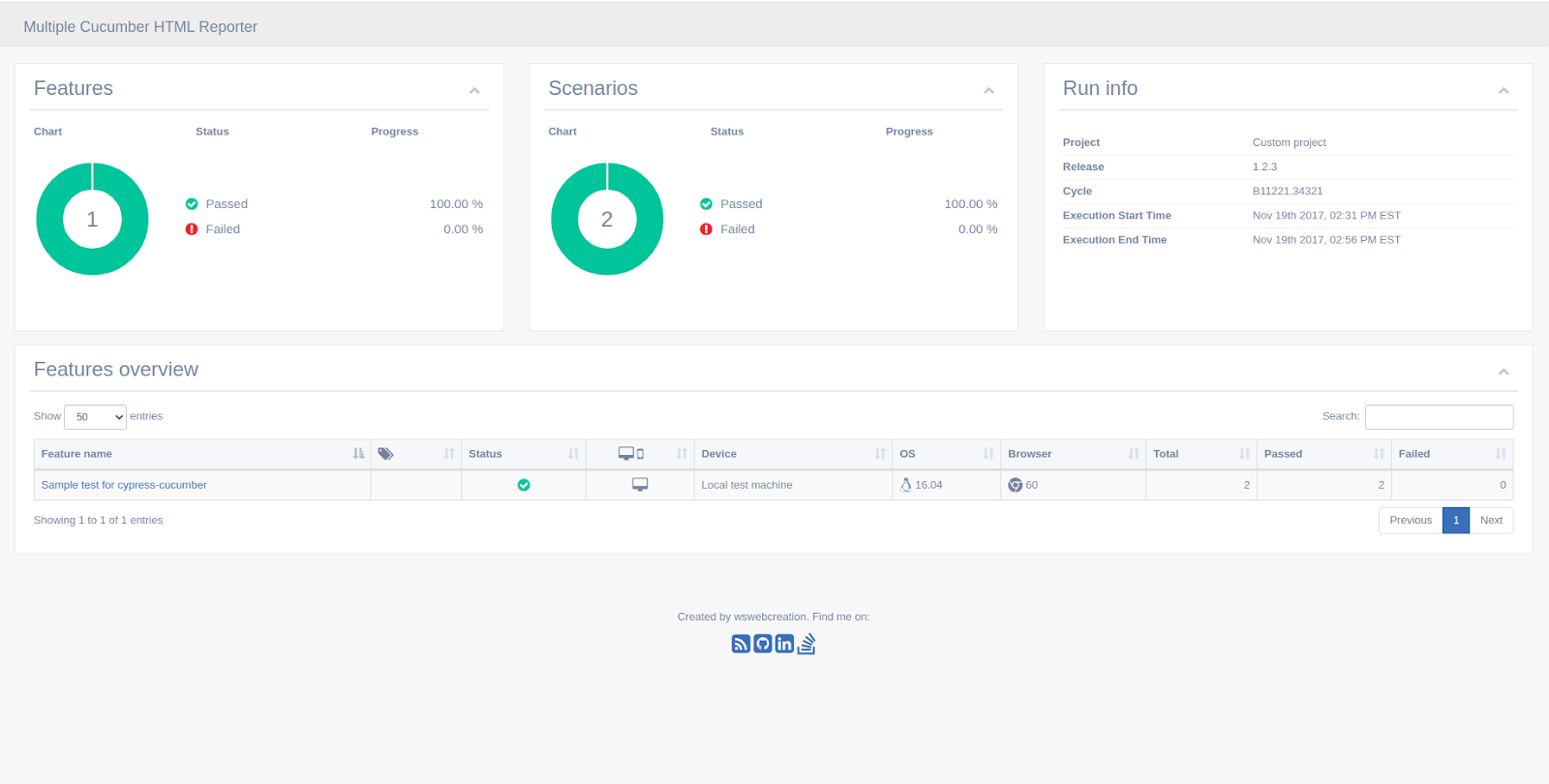 That’s all folks. I hope you may have found this useful. Thanks!