Getting an insight of Blockchain

In today’s blog, I will be getting you acquainted with the Blockchain, its definition, inception and everything you need to know as a novice developer or user. A many of us have lately been getting very familiar with the term Bitcoin and have started to visualise it correctly as a digital currency. So getting into a bit more detail, the technology behind it is blockchain. And please keep into consideration that Bitcoin and blockchain are not interchangeable terms. The term Bitcoin is used to denote three things first, the underlying blockchain technology, second, the protocol that runs over the blockchain technology and third, it denotes a digital currency. In this blog, I shall be specifically be talking about the technology blockchain. In the blog below, I shall briefly overgo the Blockchain 1.0, 2.0 and 3.0 just to convince you of its exponential potential and categorization.

The Blockchain originated from an innovation of designing an architecture for a new system of decentralized trustless transactions. Later on, this key innovation became its definition. The blockchain is the next big computation paradigm after the social and mobile networking. This paradigm could well be the one for this decade by establishing the “connected world of computing” by building over the blockchain cryptography. Defining blockchain in a layman term is as simple as saying it is essentially a public ledger with a potential as a worldwide decentralised record that could cater for registrations, inventory, and transfer of assets of finances, property, votes, software, data and ideas. The above definition not only explains its domain but its potential as an automated system to facilitate tracking of all digital endeavours.

Diving into little more details, for the conveniences of the organizations and individuals the activities in the domain of blockchain evolution and development has been broadly categorized into Blockchain 1.0, 2.0 and 3.0. The time lines for the three are specified in the diagram below : 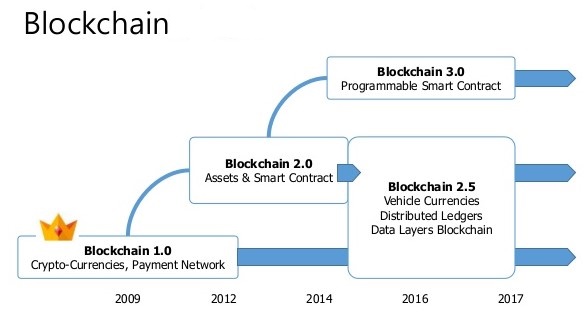 Let us get a gist of all of them in slight detail:

Blockchain 1.0
Blockchain 1.0 is CURRENCY, it is everything that relates to deployment of crypto currencies in domains and application that relate to cash and money. This could include currency transfers, remittance, and digital systems for payments.

Blockchain 2.0
Blockchain 2.0 is all about CONTRACTS, Everything in the economic board ranging from the stocks, bonds, futures, loans, mortgages, titles, smart properties and smart contracts is involved here. The domain of its span is vast in the economic market and financial applications. It is simply everything that is beyond the simple cash transactions.

Blockchain 3.0
Blockchain 3.0 is all that is beyond the scope of the above two that is it expands its footprints in the areas pertaining to government, health, sciences, literacy, art and culture etc

The illustration above defines the layer of the three categories and how they evolved over and encapsulated the previous one.

Now another important question that arises after Blockchains is that will it or how will it affect the current Internet. Technically speaking Blockchain would be like adding a new layer of the application on top of the existing application layer, adding a new tier that will allow economic transactions that could be monetary currency payments in digital form or something in the lines of complicated financial contracts. And adding to its feather of advantage could be the fact that it will expand and adapt faster than the internet because of global network pre-existence.

Does this mean that the Blockchains can effectively flatten the global transactions and ease the business radically? Yes, Blockchains are a definite answer to the flattening of global fields in terms of currency, assets, ideas, and information. A Blockchain is essentially a giant spreadsheet for registering all assets held by the parties globally and acts as an accounting system for transacting over them on a global scale. Now the transaction of the assets can be as varied as registration, inventory, exchange, transfer etc. Not only the transactions but the assets too can be varying from finance, economics, money, physical property(hard assets), cloud, space(soft assets) and intangible assets like reputation, scale, votes, and shares etc. So to summarize what blockchain can do for us  :

If you wish to understand the actual day to day application of the Blockchain, you can refer to the following blog https://blog.knoldus.com/2017/08/13/transforming-to-a-new-world-with-blockchain-technology/. It dives into the details of the Blockchain applications from a user perspective.

Blockchain: Blueprint for a new Economy by Melanie Swan

Pallavi is a Software Consultant, with more than 3 years of experience. She is very dedicated, hardworking and adaptive. She is Technology agnostic and knows languages like Scala and Java. Her areas of interests include microservices, Akka, Kafka, Play, Lagom, Graphql, Couchbase etc. Her hobbies include art & craft and photography.

3 thoughts on “Getting an insight of Blockchain4 min read”