How to managing applications in docker containers

Docker is an open platform for developing, shipping, and running applications. It provides a standard way to run the code. Docker containers uses resource allocation in the kernel to run multiple containers on the OS.  It was created to work on the Linux platform. Docker now extends support for non-Linux operating systems including Microsoft Windows and Apple OS. This tool provides several advantages to the teams building, testing, and managing the deployment of applications in production. It keeps a track of a consistent set of application codes and supports libraries through the entire development lifecycle. It makes the applications to easily migrate containers from one execution environment to another.

Virtualisation is the process of running a virtual instance of a computer in a layer abstracted from the actual hardware. It is used for several purposes such as running the applications that are meant to run in different environments or operating systems. Therefore, it offers the ability to run the different applications safe from the processes running in the other virtual machines by means of isolation. To enable the host computer to support multiple guests, Virtual machines take the help of hypervisors. Moreover, it shares its resources such as memory and processing. A hypervisor reduces space, energy, and maintenance requirements for the system running several applications. 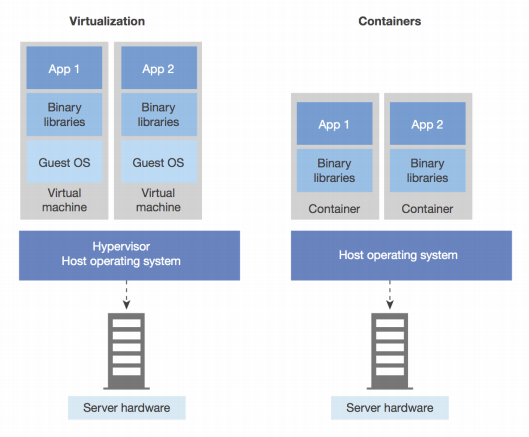 Docker supports libraries that an application needs to run in its container for it to run on any laptop, test lab, data center, or in a cloud. Google, Amazon, Red Hat, Microsoft, and VMware supports this tool.

Docker Hub is a centralized repository that allows the users to share the images with the community. It gives the ability for the developers to push their code to release into production. All the components of the application stack can be downloaded and assembled into a working application system. Although, being a suitable options for the developers, this still creates a problem for the operations team. The Ops team has to support stacks downloaded and assembled from the third party websites into which they have less visibility. In this case, a layer of abstraction of the docker container brings tremendous productivity benefits.

Google developed Kubernetes as an open source tool for the purpose of Docker orchestration. Therefore, it manages workloads within a cluster and schedules nodes based on demand to ensure state is valid and meets user requirements.

It is an open source project that provides APIs to manage CPU, memory and storage, and other computing resources. Apache Aurora is a mesos framework for long running services as well as cron jobs. It allows distributed systems to be built and run in a fault-tlerant and elastic way. Kubernetes on Mesos is a significant enabler for enterprise adoption of Docker and containers.

Developers use Docker to decentralize packages and divide tasks into separate, stand-alone apps by building modules called microservices. The ability to trace the flow of work, time the flow of work and find bottlenecks and errors across highly distributed environment is critical to manage.