Akka Streams is a library that is used to process and transform a stream of data. In this blog, I’ll be discussing the components of Akka Streams. Akka Streams is an implementation of Reactive Streams and uses bounded buffer space, and this property is known as boundedness.

To use Akka Streams, add the below dependency in your build.sbt:

A stream is a flow of data that involves moving and transforming data. An element is the processing unit of the stream. Akka Stream consists of Source, Flow and Sink which are described below in detail.

It has exactly one output and is responsible for generating the data. Elements are emitted by the source.

It has an input and an output. It takes data from a source and apply some processing and transformation over the elements and return the processed elements to the sink. The data generated by the source can be filtered, transformed as shown below:

It has exactly one input that accepts elements from the flow. Sink is also parameterized with two values. The first parameter specifies the data type that the sink will accept and the other parameter defines the type of auxiliary information. Sink can be of many forms as shown below: 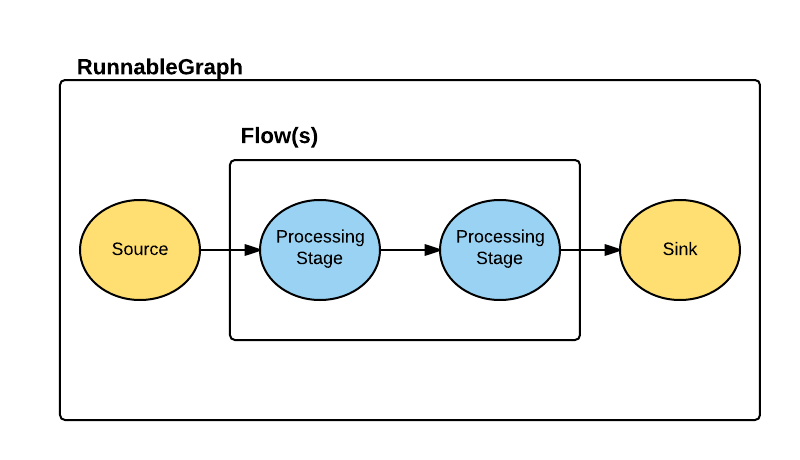 In the above example, the source is producing integers from 1 to 100. The flow has been created that filters the even numbers and doubles it. Then, there is a sink (named as sinkPrintingElements) which prints the elements on the console. The connection between the source, sink and flow is provided by the RunnableGraph[Int, Future[Done]]. To execute the created stream, run() method is called over the runnableGraph. Runnable graph can also be created without providing a flow, which means Source and Sink are the only necessary components that are used to run a stream.

Also, note that the stream requires a materializer to execute. The materializer is responsible for allocating the resources such as Actors to run the stream. ActorMaterializer can either be provided as an implicit variable in the scope or explicitly while running the stream.

To run the streams using RunnableGraph is one way of executing the streams. Another way is to use the inbuilt functionalities like runWith() method that takes Sink as an input parameter. In the below example, runForEach()  method has been used that calls the runWith() method in its implementation. An example using this approach is shown below:

Another thing to note here is that the program doesn’t terminate even if the whole stream has been processed. The reason for this is the ActorSystem because the ActorSystem is never terminated.

Akka Streams provides a number of features like reusability of code, time- based processing and back-pressure(the backbone of Reactive Streams). I’ll be discussing these features in my next blog.

Aashrita Goel is an Intern having experience of more than 4 months. She is perceived as a cooperative person, devoted and capable expert and an innovation aficionado. She has great time administration and relational abilities. She believes in standard coding practices. Her emphasis dependably stays on functional work. Her hobbies include reading books and listening to music.