Git Flow is an abstract idea of a Git workflow. It helps with continuous software development and implementing DevOps practices. The Git Flow Workflow defines a strict branching model designed around the project release. This provides a robust framework for managing larger projects.

Git Flow is ideally suited for projects that have a scheduled release cycle and for the DevOps best practice of continuous delivery. It assigns very specific roles to different branches and defines how and when they should interact. It uses individual branches for preparing, maintaining, and recording releases.

Instead of a single master branch, Git Flow uses two branches to record the history of the project. It is based on two main branches with infinite lifetime namely master and develop.

Master and develop branch workflow is demonstrated in the given diagram: 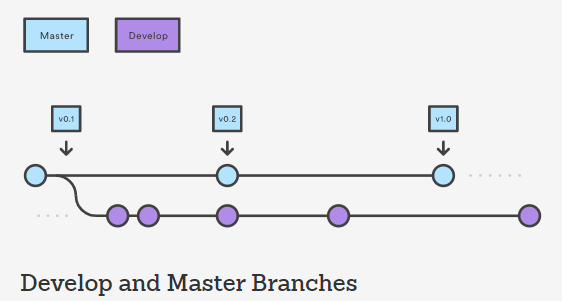 It’s also convenient to tag all commits in the master branch with a version number.

Assuming we have a repo set up with a master branch. The first step is to complement the default master with a develop branch. A simple way to do this is for one developer to create an empty develop branch locally and push it to the server. This branch will contain the complete history of the project. Other developers should now clone the central repository and create a tracking branch for develop.

When using the git-flow extension library, executing git flow init on an existing repo will create the develop branch.

Each new feature should reside in its branch, which can be pushed to the central repository for backup/collaboration. Feature branches use the latest develop as their parent branch. When a feature is complete, it gets merged back into develop. Features should never interact directly with the master branch.

Feature branch workflow is demonstrated in the given diagram: 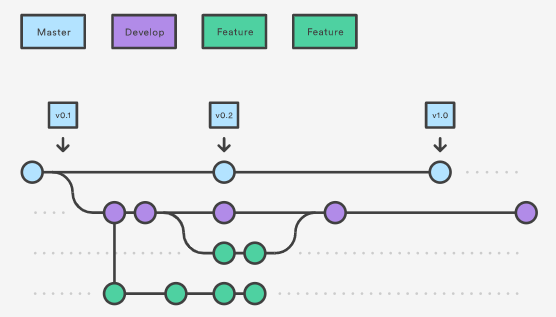 Once develop has acquired enough features for a release (or a predetermined release date is approaching), we fork a release branch off of develop. Creating this branch starts the next release cycle, so no new features can be added after this point—only bug fixes, documentation generation, and other release-oriented tasks should go in this branch. Release branch may branch off from develop and must merge into both master and develop.

Release branch workflow is demonstrated in the given diagram: 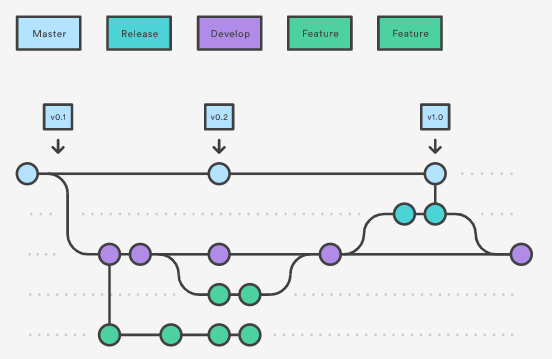 Using a dedicated branch to prepare releases makes it possible for one team to polish the current release while another team continues working on features for the next release.

Maintenance or “hotfix” branches are used to quickly patch production releases. Hotfix branches are necessary to act immediately upon an undesired status of master. Hotfix branches are a lot like release branches and feature branches except they’re based on master instead of develop. This is the only branch that should fork directly off of master. As soon as the fix is complete, it should be merged into both master and develop (or the current release branch), and the master branch should be tagged with an updated version number.

Hotfix branch workflow is demonstrated in the given diagram: 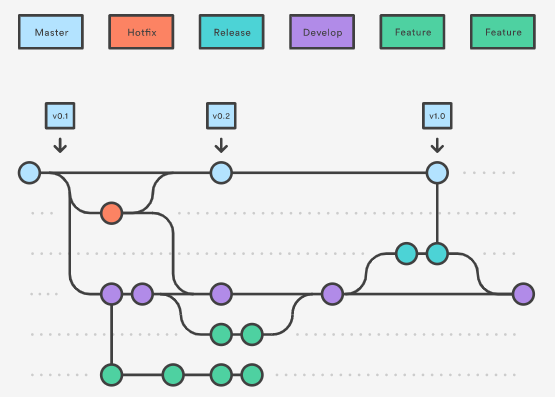 Having a dedicated line of development for bug fixes lets your team address issues without interrupting the rest of the workflow or waiting for the next release cycle.

Well nothing is ideal, so Git Flow holds some disadvantage as well like:

Here we discussed the Git Flow Workflow. Git Flow is one of the many styles of Git workflows you and your team can utilize. Let’s summarize the whole workflow of Git Flow: