Kafka connect and its purpose

Kafka connect is not just a free, open source component of Apache Kafka. But it also works as a centralised data hub for simple data integration between databases, key-value stores etc. The fundamental components include-

Moreover it is a framework to stream data in and out of Apache Kafka. In addition, the confluent platform comes with many built-in connectors,used for streaming data to and from different data sources.

Tasks are responsible for the main implementation of copying of data. Moreover they are main actor in data model for connect.The connector instance are the one that coordinates with the set of tasks that in return are copying data. Also with very little configuration Kafka Connect provides built-in support for parallelism and scalable data copying.

Since we know that connectors and task are the logical unit of work. Therefore they should be scheduled to execute in a process known as workers.Types of workers –

Contrary to the above one, distributed mode provided scalability and automatic fault tolerance for Kafka Connect. In this we can add or remove nodes as per our requirement.Firstly you start the worker process using same group.id . Then it automatically coordinate to schedule execution of connectors and tasks across all available workers.

They are used by tasks to change the format of data from bytes to a Connect internal data format and vice versa.Moreover they are responsible for serializing and de-serializing the data.

The main purpose of transform is to alter the data to make it simple and lightweight. It is convenient for minor data adjustments and event routing. It accepts one record as an input and outputs a modified record.

There are multiple reasons due to which an invalid record may occur.The main errors that occur are serialization and deserialization (serde) errors. For example, an error occurs when a record arrives at the sink connector in JSON format, but the sink connector configuration is expecting another format, like Avro. When serde errors occurs, the connector does not stop. Rather, the connector continues to process records and sends the errors to a Dead Letter Queue . You can use the record headers in a Dead Letter Queue topic record to identify and correct an error when it occurs.

The Purpose of Kafka Connect

It consists of two things –

Source Connector’s purpose is to pull data from data source and publish it to the Kafka Cluster.Therefore to achieve this Source connector internally uses Kafka Producer API.

Sink Connector’s purpose is to consume data from the Kafka Cluster and sync it to the target data source. However this is achieved by internally using Kafka Consumer API.

Use Cases of Kafka Connect 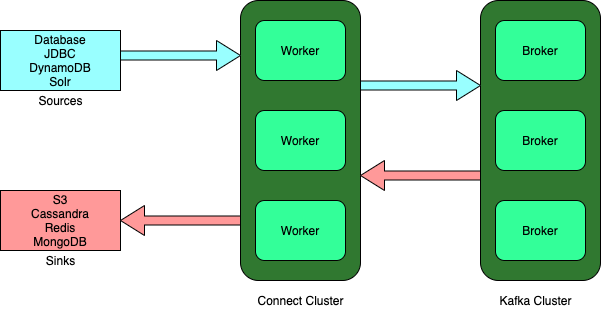 Shivani Sarthi is a Software Consultant at Knoldus Software. She has completed her MCA from BCIIT and Bachelors in Electronic Science from Delhi University. She has a keen interest toward learning new technologies. Her practice area is Devops. When not working, you will find her watching anime or with a book.

1 thought on “Kafka connect and its purpose5 min read”