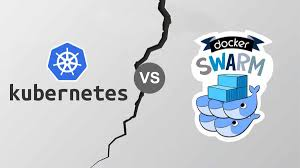 So lets discuss one by one and see the the differances between them.

The name Kubernetes originates from Greek, meaning helmsman or pilot. Kubernetes is an open-source, portable, and extensible platform for managing containerized workload and services. That facilitates both declarative configuration and automation. Kubernetes manage the containers that run the applications and ensure that there is no downtime into a huge scale production environment.

Docker swarm is a container orchestration tool, meaning that it allows the user to manage multiple containers deployed across multiple host machines. Docker Swarm is designed to work around four key principles:

Here you get to know that both in some manner are the same , So now let’s check out the differences and see:

The installation setup is complex of Kubernetes . It needs serious planning. The instruction of setup change as per the os. You need to choose the correct IP ranges. Various 3rd party packages like minikube/microk8s and kubectl/kubeadm are need to be install for the working and development of kubernetes.

Where as the Docker-Swarm setup is very simple as compared to kubernetes. Only one set of tools is required to learn to build upon environment and configuration. Docker Swarm also provides flexibility by allowing any new node to join an existing cluster as either a manager or a worker.

Where as in “Docker-Swarm” has inbuilt feature of load balancing. All containers within a single cluster join a common network that allows connections from any node to any container. I means it support automatic load balancing.

Kubernetes supports the automated rollout and rollbacks which means you can define the desired state for your containers and it fails to achieve that desired state it rolls back to the previous deployment.

Whreas in docker swarm  at rollout time you can apply service updates to nodes incrementally. The swarm manager lets you control the delay between service deployment to different sets of nodes. If anything goes wrong, you can roll back to a previous version of the service.

Volumes in the kubernetes are abstraction to share the data between the differant containers in the same pod. In kubernetes volumes have particuar lifetime. It support both persistant and non-persistent volume. You can create both local as well as global volumes.

Whereas in “Docker-Swarm” we can create only local volumes. These volumes are directories shared within one or more containers. Data volumes also persist even when we delete the volumes that container uses.  To create global volumes, the Docker engine supports volume plugins.

Kubernetes commonly uses flannel to accomplish container networking. Containers are joining in a virtual network and announce through etcd. TLS authentication is also possible but requires certificates to generate and need to install manually to all nodes.

Kubernetes supports multiple versions of logging and monitoring when we deploy service within the cluster:

Docker Swarm support for only monitoring with third-party applications.