Silhouette is a security library for Play framework. Its basically a core only fork of Secure Social, which is another security library for play framework. Secure Social is a great framework for lots of user but my experience with secure social is not that good, nor with some of my friends and colleagues who use Play framework in their application. It’s been thrown out from the projects we worked on. However I am not going to talk about secure social here, technologies are like that only, it works for some people and doesn’t work for some other people, and for whom it do not work they find or build some alternatives. Silhouette is born because of securesocial’s problems, mostly because of its tight coupling. Silhouette is a loosely coupled security library. It gives users the flexibility to inject their own implementation when things don’t seem work with the given implementation.

We can use the library in the play controllers by extending the Silhouette trait.

Inside Silhouette the codes are divided in two categories api and impl. Here api is the main engine of the library. All the work flow is handled here and it’s mostly consist of traits. And there is the impl part which gives us the default implementation of things we generally required in our applications e.g. implementation for the providers – OAuth1, OAuth2, OpenId , some service implementations, some authenticator implementations etc. The trait Silhouette is the main trait in this library it handles all the function calling and that sort of stuffs of the library. It needs an environment to handle all the functionality. The environment holds all the required services to drive the library according to the user’s perspective. Below is a diagram which tells shows what are the services the environment holds. 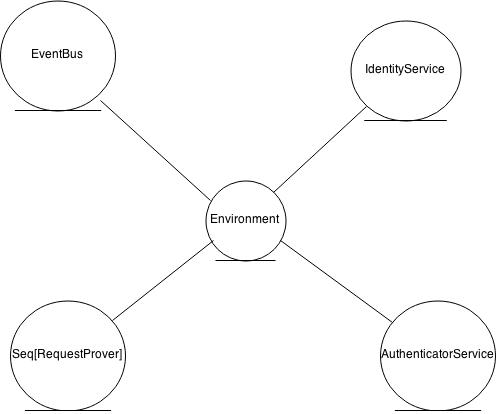 In order to implement identity service we have to extend the trait IdentityService. The only method the IdentityService holds is the retrieve method which takes a parameter LoginInfo(LoginInfo is a case class which holds two parameters providerId, providerKey as string). However we can add our own methods here as well. Below is implementation of IdentityService.

The Environment holds collection of Providers. Provider basically is a service to identify the user in the applicaiton. Silhouette is providing 14 different implementation for different providers including facebook, linkedin, github, twitter, yahoo, google etc. Its up to the user to use the implemented providers or implement their own providers by implementing the traits Provider and RequestProvider. We can embed more than one provider in our application and that is why environment takes the providers as collection…Seq[Provider].
The EventBus basically handles the events that occured in the application. We can give our own implementation of events by implementing the trait SilhouetteEvent. Its basically based on Akka’s event bus.

That was all about the environment that is required for the Silhouette to work on. Once the environment is ready we are good to go to secure our endpoints. While developing the application we might want some actions to be accessed by authenticated users only, some actions to be used by any user, or some actions need some authorization for it. All these stuffs are implemented in the Silhouette trait. We can use SecuredAction to secure an action which needs to be performed by authenticated users only e.g.

Here the SecuredAction is taking AdminRights as parameter which is implemented by extending Authroization trait. It uses UserTypes which is an enum and has values Admin and Normal User. So when we pass AdminRights to the SecuredAction that simply means only the admin can access that action. I am just giving a simple implementation to it, if required we can put more stuffs in the isAuthorized method.

UserAwareAction basically does not need any authentication or authorization for it, but if the user is authenticated or authorized it follows the other things, like keep the user session alive or stuffs like that. We can use it simply like below 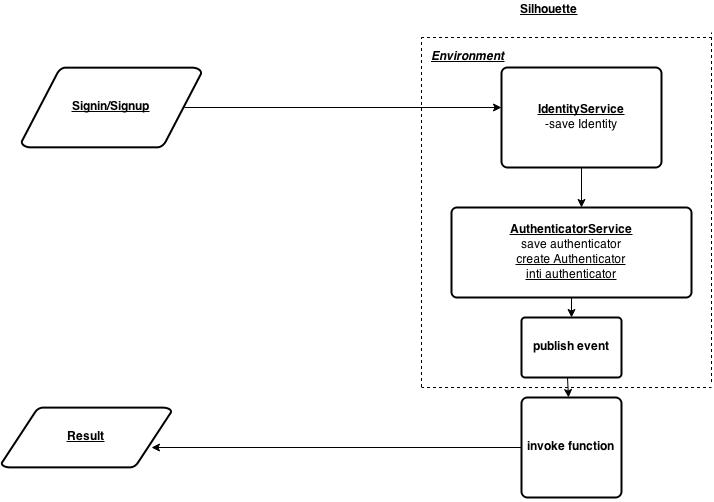 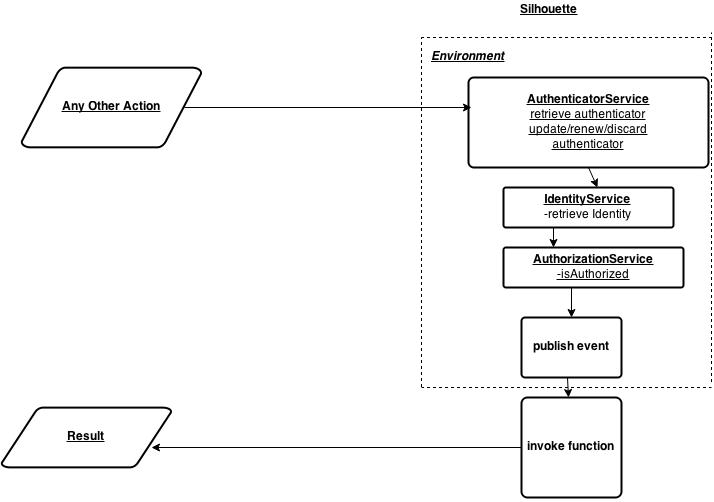 The diagrams that I am using here are just to visualize the flow, more actions are included in the workflow in real. Users can directly use signin throw the OAuth1 or OAuth2 or similar providers, their signup process is generally included in this part. So whenever the Signin/Signup happens Identity service is used to save or retrieve the identity then the Authentication service is called to create the authenticator and initiates the authentication process e.g. sending some token in the cookies, set timeout option etc. Publishing of the Signin/Signup event occurs here. Then finally the code block gets called and the result is send back to the result. Result could be the json or the play template here.

However in case of any other actions, the flow becomes a bit different. For these actions some sort of identities are sent from the user end. Then the Authentication service validates this identification, once its get validated the identity service is called to retrieve the identity and authorization action gets performed if there are any. Once its get authenticated or authorized the code block gets invoked. Once the code block gets invoked the result is sent to the user. So thats all about it. More about Silhouette could be find here.

Note: Most of the code snippets used here are taken form here.