Hello folks, Hope you are enjoying your coding days!!! in this blog, I will explain a cool technology named Akka-Http which i have recently explored in my coding days!!

The Akka HTTP implements a full server- and client-side HTTP stack on top of akka-actor and akka-stream. It’s not a web-framework but rather a more general toolkit for providing and consuming HTTP-based services.

Akka.Http comes with server side and client side libraries. It also comes with good support for standard serialization such as JSON/XML and the ability to roll your own serialization if you want to.

It also comes with a fairly nifty routing DSL which is very much inspired by the work done in Spray(Spray is an open-source toolkit for building REST/HTTP-based integration layers on top of Scala and Akka.)

Adding Akka-Http dependency in your project

To start using akka-http, you should add the following dependency to project. I am using sbt for build management. You can also use other build tools like maven.

Because akka-http depends on akka-http-core you don’t need to bring the latter explicitly. Still you may need to this in case you rely solely on the low-level API(make sure the Scala version is a recent release of version 2.11 or 2.12.) 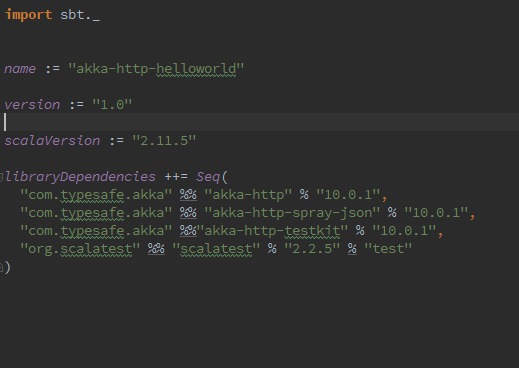 To have  a correctly formed/hostable server side we need a couple of things in place, namely the following

Once we have these things it is really just a question of binding the route to a host name and port.

Akka HTTP uses akka actors for handling concurrent requests. So in the first line we have to create akka actor system.

Akka HTTP uses akka reactive streams for stream processing on TPC. So in a reactive system,we need to specify flow materializer which specifies the how requests/repose flow get processed. In akka-http, actors will be used for handling request and response flows. So we use ActorMaterializer here.

ActorMaterializer is responsible for creating actors that will eventually run the processing flow and it requires ActorSystem to be available implicitly.

Route specifies the URI endpoints REST server exposing. It is combination of multiple paths, routing API of Akka HTTP provides a DSL to describe HTTP “routes” and how they should be handled. Each route is composed of one or more level of Directive s that narrows down to handling one specific type of request.

There are some common routing DSL bits and bobs, such as:

A directive can do one or more of the following:

Once we have all pieces in place, we need to create a server and bind to this route, address and port.

This creates and runs a simple http server at http://localhost:8383.

Here is the whole example :- 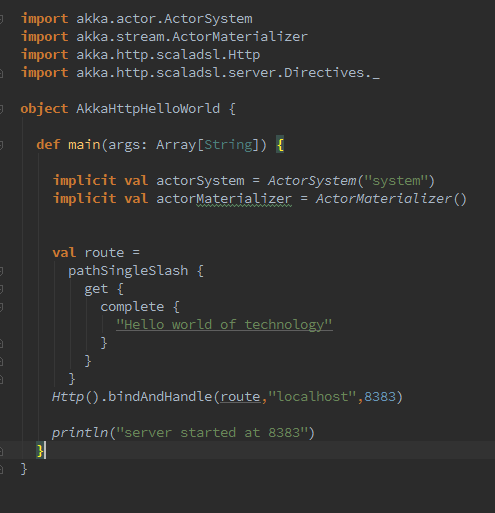 Hope this blog will provide some help and give you brief  introduction to Akka-Http .