Hi Readers, In this blog we will learn that how we can create AWS resources using Ansible Modules. But before moving to core of the blog we will see few concepts related to Ansible, it’s installation and connecting our ansible with aws and few more things.

What is Ansible and Why do we need this?

Keeping it very brief, Ansible is an IT automation tools. It helps in,

To connect Ansible with AWS you will need to generate Access Key ID and Secret Access Key from AWS console. Once you have these Id’s, install aws-cli using this simple command,

After this, run aws configure and enter your Access Key ID and Secret Access Key as prompted,

What are Ansible Modules?

Modules in simple words are like generic template which enables the code re-usability in our code base. Instead of writing separate script for similar kind of task we can create our own modules and use it again and again with few customisation as per our use-case. Also we can use pre-existing modules as well.

Installing Module in your Local System

You can get several modules from ansible-galaxy. Below command will install all available amazon.aws modules in your local system which are ready to use.

Know where the Modules are being stored

To know where the above modules are being installed, run below command with any content of this module be it ec2_ami , ec2_vpc_net, aws_s3 etc. See other contents here. 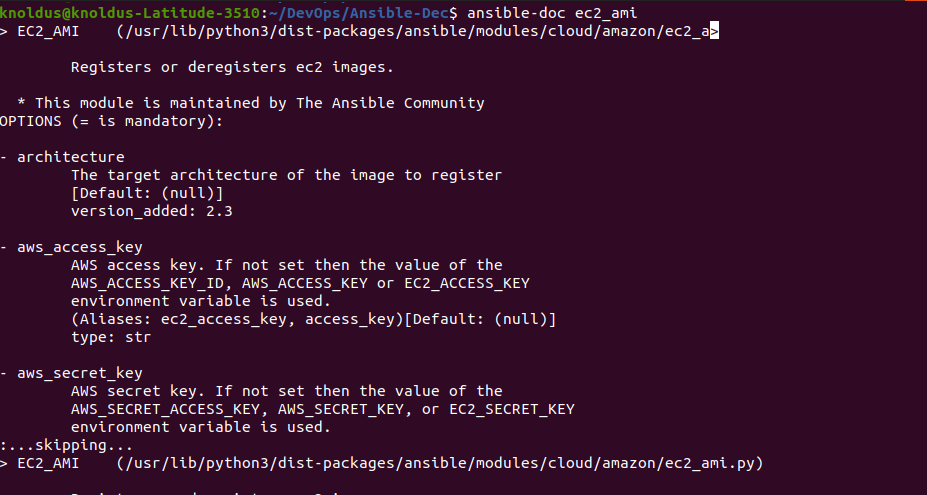 Consider a scenario, we want to write a idempotent(we will see this term in script) script that creates n number of ec2 instances, in a specific region and waits until the instance is in running state. And in the end we want to delete that instances as well.

From terminal run the below command,

Now we want to change the status of ec2 instance to Stopped, so for that create a new playbook as below,

From terminal run below command,

The output for this would look like this from terminal,

That’s all for this blog, I hope you got a quick overview about how to create and stop ec2 instances on AWS using Ansible Modules with this blog. For the source code you check my github. If you still have any doubt, feel free to contact me nitin.mishra@knoldus.com.

Thank you for sticking to the end. If you like this blog, please do show your appreciation by giving thumbs ups and share this blog and if you feel, give me suggestions on scope of improvements.

Nitin Mishra is a Software Consultant at Knoldus Software LLP. He has done MCA from GGSIPU and completed Bachelor of Science in Computer Science from Delhi University. He is a tech enthusiast with good knowledge of Java. He is majorly focused in DevOps practice. On personal front he loves to travel mountains and writes poetry.