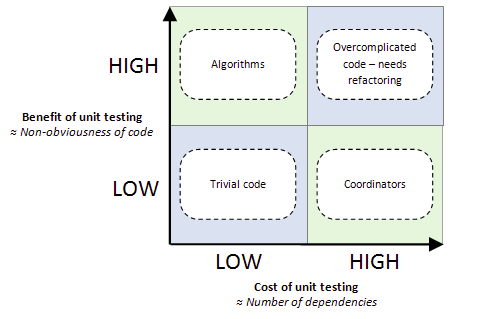 One would expect that after being in the industry for almost 20 years, a trivial comparison like this would be years behind me but I probably less correct. It seems that the right amount of Unit tests is still a burning issue which needs some attention. At Knoldus, we have the policy of maintaining a very high code coverage so that we can objectively validate the quality of the code through our now publicly available tool CodeSquad.

We take pride in the fact that we are able to reduce the software lifecycle cost by 57% because of our focus on quality when the software is being developed. Almost, 80% of the cost of the software is when it is in the maintenance and enhancement phase post delivery.

Given the logic above, we place a very high premium on writing very very effective unit tests. However, a recent discussion with one of our esteemed clients made us rethink the strategy. Let us be clear though that we do not believe that we should not be writing unit tests but the distribution between Unit and Integration tests, the scenarios in which we can skip unit tests need a review. Following is an attempt to do that,

Let us start with the advantages of the Unit tests, as we have known them through ages

Now, let us look at scenarios in which Unit tests might not be “as” useful

Now, let us look at scenarios in which Unit tests are absolutely mandatory

As you would notice, it is less useful to write unit tests for code which is either trivial or just does coordination.

So how does this compare to Integration tests and End to end tests?

In his blog Martin Fowler described the following pyramid

As you would notice, it is easy cost wise to write Unit tests which run faster as well as compared to End to End tests which are costly and run much slower. One of the parameters which not brought about in the post explicitly is

The Level of confidence

With unit tests though we can ensure that the units are working fine, however, the level of confidence is lower as compared to an E2E test where we are assured that the system is working fine.

The sweet spot, however, is somewhere in between.

Integration tests strike a great balance on the trade-offs between confidence and speed/expense. This is why it’s advisable to some of your effort here as well.

Integration tests would run across the units, provide more level of confidence, reduce the need of mocking at all places and would run easily with your build cycles without causing undue stress on cost or confidence.

There are major advantages with Unit tests and the most important in my perception being the clarity of design. A well designed software can be tested easily. If you are finding it hard to test a piece of software then it needs a design re-look in most cases.

That said, going overboard with unit tests to improve code coverage is a Unit test smell. When you find yourself making endless mock objects and the logic falls under the category of Unit test smells as described above then we are getting diminishing returns.

Hence, do write unit tests for all the mandatory cases described above, for other scenarios make sure that the pieces for which you might want to skip the unit tests are covered by integration tests. The code coverage in CodeSquad should still be >85% when you run it with your CI environment 😉